I don't know what it is about Halloween. Everything seems just slightly more creepy even if it's nothing big. I'm not passing out candy this year, so I'm just in some comfy clothes getting ready to ...wait. What was that noise?? 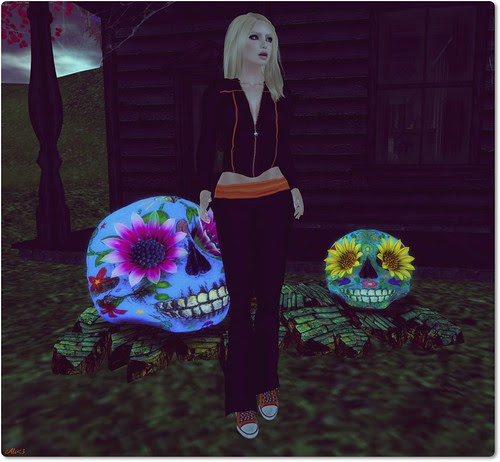 Today for Moody Monday, you can pick up this Yoga Set in orange and black from Stellar. If you're like me and you enjoy being both casual and cute, this is definitely something you need to pick up!

Oh, and are you in the New Trails subscriber group? If so, be sure you check your notices for the free gift of sugar skulls for Día de los Muertos.

I have to go turn off all the lights now. Even if it's scary in here, at least there won't be any teens texting on their Blackberries and expecting free candy.

Posted by Alicia Chenaux at 7:16 PM No comments:

I'm Never Without My Phone

Yeah, I'm that girl. The one who is never more than a couple of feet away from her phone, the one who keeps it by her pillow, the one who freaks out if she runs to grab take out and forgot her phone at home. I'm always on call for my parents, and even turning the ringer off to go out and enjoy a movie isn't something I feel comfortable with. Heck, I even take it with me when I go outside to get the mail. 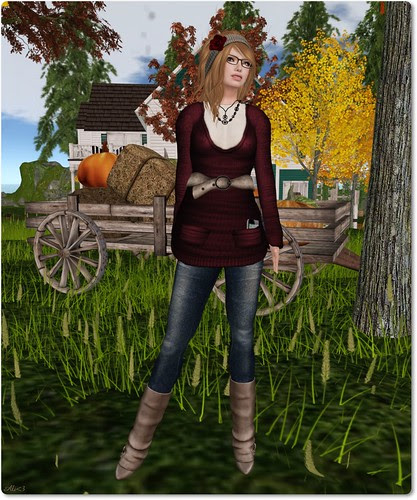 When I saw the Fall sweater from Ducknipple, I knew it was for me! With the little iPhone in the pocket, it's just perfect! If you click it, it will disappear, and no, there doesn't appear to be an Android version. :-p The sweater comes with the necklace I'm wearing, and also 8 different colored undershirts [not shown here]. The belt also changes color.

By the way, if the Ducknipple creator reads this: Could you please put the name of the store on your folders? I love love love the store but I always lose items in my inventory because the store name isn't on the folder. Thanks!

Posted by Alicia Chenaux at 6:05 PM No comments:

The weather here has been awesome lately, and it makes me want to go on long walks to see what I can see. But mostly I just want to walk around in my new Portas Booties!! 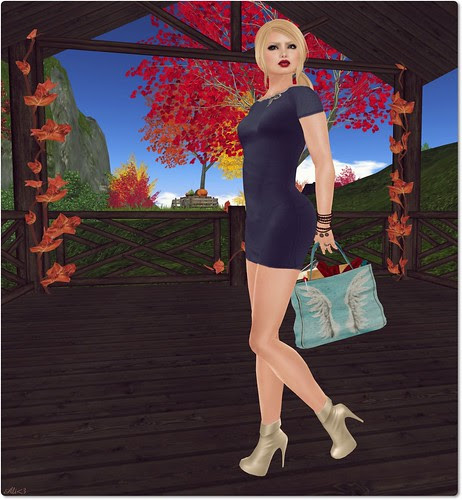 From AnE Meshworks, an Adam n Eve brand, these little booties are short, cute, and in the most soft lickable leather I've seen in ages! They ARE mesh, so you know the drill. Get a mesh viewer or GTFO. :-p I kid, I kid!! But seriously, you need a mesh viewer to see these boots properly.

I'm standing in the Cascadia Autumn Pavilion from Funky Junk, on sale this weekend for Spruce Up Your Space. It's the perfect autumn decor for your land!

Time to take my boots and go walking!

Funky Autumn Gatcha At The Nest!

Do you like gatcha? I bet you do! The Nest is having a big 4 day Guising & Gatcha party starting tomorrow! Guising is the same as trick or treating, for those who are not familiar with the term. [I wasn't.] The Guising items are only $5L!! What a treat! Lots of great home & garden designers are participating, including my favorite - Funky Junk! 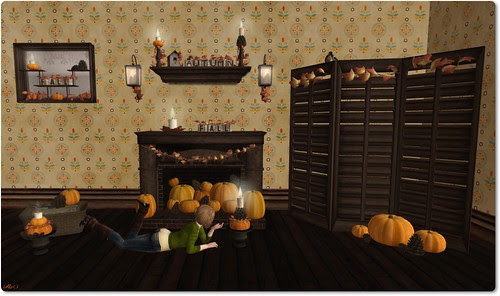 Seven new items for the fall season! It's all cute cute cute and only $40L a play! The fireplace with the pumpkins spilling out and the blocks & candle on top is the rare item, and you will want it! Especially if you like to decorate for the season as much as I do!! Be sure you stop by Funky Junk at The Nest for Guising because the item matches the gatcha items, although I don't have it shown here. Guess you'll just have to go to check it out, huh? :)

The Nest Guising & Gatcha event begins on Friday October 28th and lasts until October 31st, and you won't want to miss it!!

Posted by Alicia Chenaux at 12:42 AM No comments:

It was one of those days. My body was tired, my brain was fried, and all I really wanted to do was come home and slip into a hot bath for a while to unwind. But you know, the bath wasn't nearly as relaxing as I would have liked. Maybe it's just the season for being spooked, but I had the strangest feeling that someone was watching me... 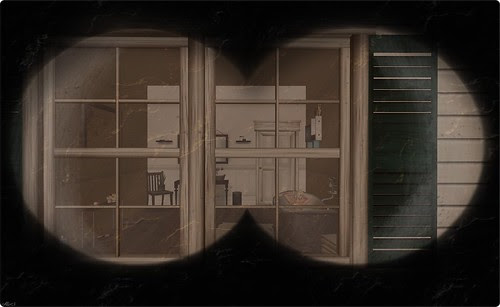 Do you have a FilterCam from MechanizedLife? If you take photos in SL, you really should have one! I blogged about FilterCam back in 2009 and it still remains one of my favorite gadgets. But it just got even better with the new Expansion Pack! There are 5 new Preset banks for a total of 90 new presets! I'm using the Scopes bank with the Binoculars preset for this photo. If you're not particularly skilled in Photoshop but you are looking to make your photos more fancy, you owe it to yourself to head over to MechanizedLife and pick up the new FilterCam Expansion Pack! Remember, you need the FilterCam to use it, so if you don't have one, get one!!

As for me...I think it's time I invest in some curtains.

Posted by Alicia Chenaux at 12:15 AM No comments:

You can stand under my umbrella

I'm not a huge fan of rain, but after this past summer where even the smallest rain shower would have been a blessing, I've come to at least tolerate when the storms roll in. Of course, maybe if I had some cute Wellingtons, like these from Gos, I wouldn't mind running out in the rain! 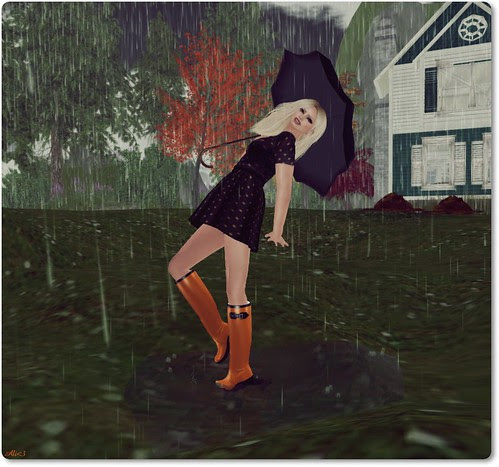 The new Wellingtons are a MESH item, so you will need a mesh compatible viewer to see them properly. [Honestly, if you're STILL kicking it in a vintage viewer and your only excuse is "I don't want to learn viewer 2," then you're missing out!!] The Wellingtons come in several colors, and if you fatpack, you can make your own color combos like I did here with the pumpkin colored boot and the black trims. I'm wearing the rigged mesh version, meaning it moves with my AO and comes in 3 sizes. The non-rigged versions work as traditional prim boots would and are able to be resized via the menu. If you choose to wear the rigged mesh boots be sure to try on all three sizes to find the best fit before running and yelling at Gospel the way I did. :-p I'm wearing the Tall size. If you're bigger than I am, either shrink yourself or wear the non-rigged ones that you can resize.

There are some days when I cannot figure out which gorgeous outfit I want to wear first. Then there are other days when I can't figure out a single thing to wear! Today is one of those days, but luckily with new releases from BOOM and some old favorite standbys, I can dance around the house and just forget about the world. And that's all you get for today, because my mind is in a far off place. ♥ 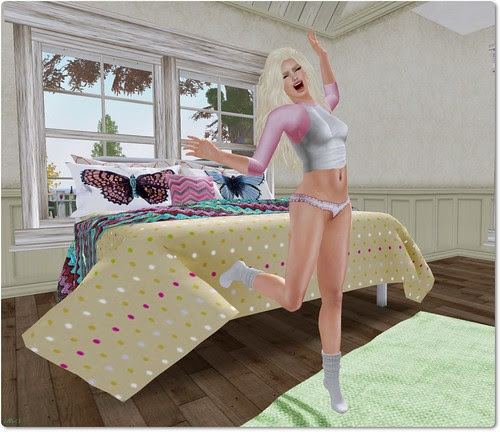 Posted by Alicia Chenaux at 3:47 PM No comments:

"Once you learn to read, you will be forever free."

I've always been a big reader. I am usually reading anywhere from 2-4 books at any given time, and the bookshelves in my bedroom are double stacked with books. I started reading when I was 3 years old while on vacation with my parents. What was the first word I ever read? "Visa." Figures! You might want to pull out your own Visa cards to go shopping this week - especially if you love Jane AND mesh as much as I do! 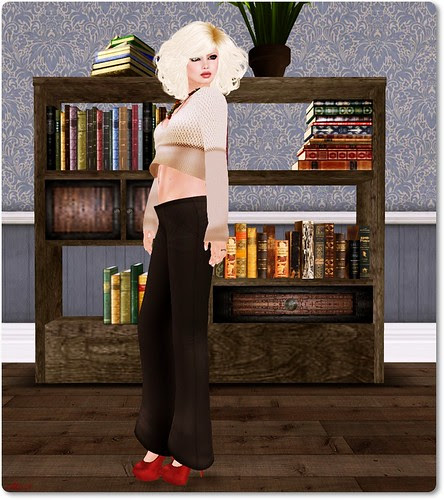 I could go on and on about how much I love the new releases. The Cropped Sweaters, the Low Ride Pants, but the best thing for you all to do is just go to Jane try them on for yourselves. Remember that you will need a mesh enabled viewer to see these gorgeous clothes properly. And can I make a plea for people to please start using mesh enabled viewers more? I always feel bad that some people see me with big ugly prims all over my body when they should be seeing my wonderful outfit!

Posted by Alicia Chenaux at 7:51 PM No comments:

Ooh, I hope you guys didn't plan on saving your money this weekend, because well, you're just not going to be able to! Lots of sales and events going on, like the opening of the October edition of Collabor88! 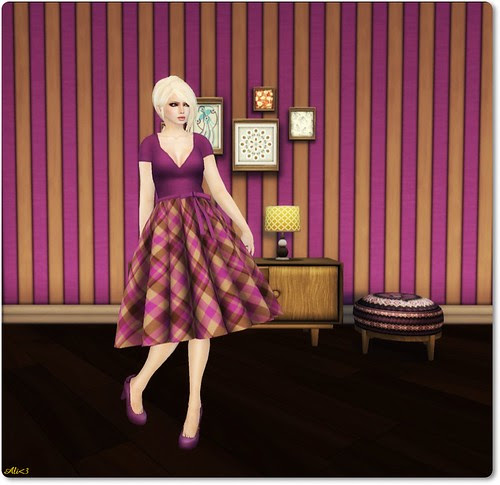 I'm simply in love with everything this month, and I know you all will be too! Dresses by Ingenue, furniture from LISP Bazaar and Barnesworth Anubis, hair from Elikatira, and loads more... Oh you guys, it's AMAZING!

Collabor88 starts tomorrow, October 8th, so get your $L and go shop!

In The Still Of The Night

There's something about the crisp autumn nights that make you think anything is possible. Like maybe you'll be standing outside, all dressed up, and Prince Charming will come sweep you off your feet! And if you're in this gown by Kouse's Sanctum, why wouldn't he do just that? 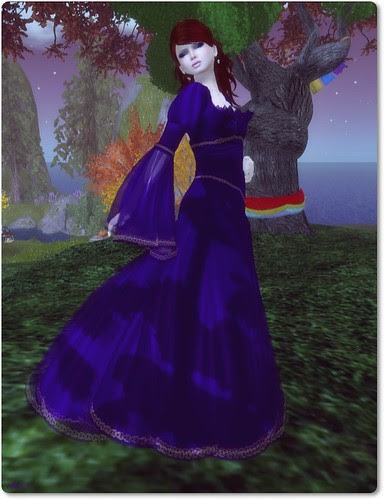 The new Juniper gowns are just oh so beautiful! The trim, the train, the ruffles - what's not to love? The gowns come in several colors, and there are options for gold or silver trim. I'm wearing the gold trim because autumn is just made for gold!

Every dress that Kouse makes, I swear it's my new favorite, so I suggest you head on Kouse's Sanctum and find your new favorite today!

Posted by Alicia Chenaux at 1:22 PM No comments: