Do you ever look at the blogs and feeds and think, "Wow, how can I get my photos to look better in Second Life?" Me too! For a long time, I thought everyone was just a Photoshop genius. And while there are some exceptional Photoshoppers out there, not everyone is. Some of them were using a nifty little HUD called FilterCam from MechanizedLife!

A few months ago, the fabulous brain behind MechanizedLife, CodeBastard Redgrave [or Codie, as she's known to her friends], passed out FilterCams at one of the blogger meet-ups as a gift. Awesome gift, because you know...we're bloggers, we take umpteen pics of ourselves! But I admit - I didn't use it for ages. I'm not particularly gadgety, and a quick glance at the instructions made me believe it was much too hard.

I was SO wrong.

FilterCam is incredibly easy to use! Wear it, click it fast to pull it up, click and hold for a second on it to pull up the menu, choose your filter, take a snapshot [make sure you have it marked to show HUDs!], and boom! Cute cute picture! My banner for this blog was taken using it!

I was working with an older version, but Codie has come up with a very awesome updated version, FilterCam 2.0!! Now with little submenus so you can find your favorite presets even easier! And 86 presets to choose from. 86!! All kinds of tints, patterns, and frames to make your pictures AWESOME. 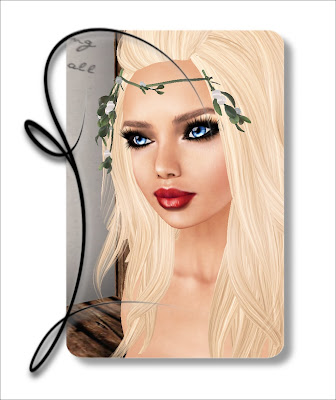 This is just one of 86 that you can choose from! And not only can you choose presets, but you can customize them to your liking. Codie, bless her, sat the other night and showed me how to do it. I'm not sure if I truly understood, but I think I did. And you can also use a tutorial by Ryker Beck to learn how to make your very own FilterCam presets! So so cool!

If you have an old version of FilterCam, just wear it and the new one should be delivered to you shortly. If you don't already have it, you can pick it up at the MechanizedLife shop on the Rouge sim or onXStreet for $1000L. Believe me, it is WORTH this price. You will adore it!

Posted by Alicia Chenaux at 1:23 AM